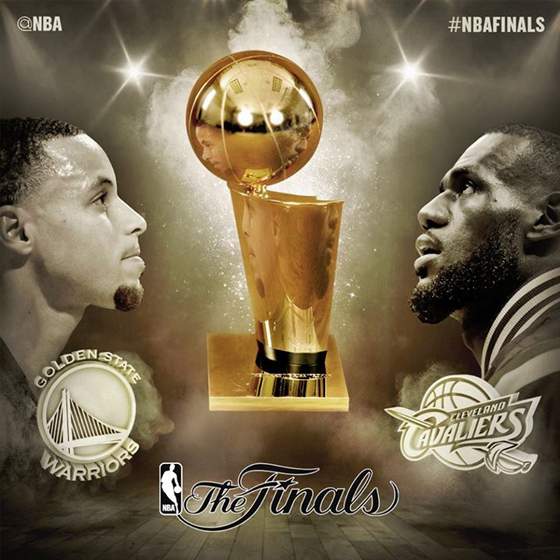 Now can I get an encore, do you want more

In a few hours there will be no more talking as Cleveland Cavaliers and Golden State Warriors will be battling for the opportunity to become champions of the NBA and get those bragging rights for a lifetime. It’s a rematch of last year’s Final and in my opinion could be the best NBA Finals in recent memory? Cleveland has been coasting through the playoffs while Golden State just endured an epic 7 game series with the OKC Thunder. Will the momentum of Golden State carry over into the Finals or will they be stifled by the Cavaliers? 7 games will determine the legacy of these players as they prepare to battle until a champion has been crowned. There’s no way to tell how many games this series will last but right now this is the best thing since the Lakers-Celtics battles of the 80’s. Will it top that…who knows but it could this decade’s version of the Lakers-Celtics battle? Golden State has the chance to repeat as champions and put the nail in the coffin as having the best season ever. If they win, they have to say “Game Blouses” and just walk off the court. You thought it was over huh hell no it’s another chance for Cleveland to break Cleveland’s championship drought and for it to be led by a guy from Ohio would be ESPN 30 for 30 worthy. It’s bad enough that “Believeland” an ESPN 30 for 30 documentary which talks about the struggles Cleveland sports has had since 1964 and how it ends with LeBron walking off the court after Game 6 against the Warriors. So many storylines, subplots and characters in this series you would think this was written by George R.R. Martin.

Golden State has had one hell of a playoff run culminating with the comeback of the season as they defeated the OKC Thunder after trailing 3-1. This is just another step as it’s reaching the final stage of completing the best season ever. 73 wins don’t mean shit if you lose the chip. If Golden State loses the chip, the headlines will never end. The Jordan Memes will never end. The talk of biggest disappointment will make Stephen A Smith talk louder than a Meek Mill album. However, if Golden State wins then the talk of LeBron failing in the finals will never end and we will be seeing the beginnings of another dynasty.

I wonder if LeBron listens to Drake because right now he is “looking for revenge because it’s all summer 16’. Let’s give LeBron his props. This man has made it to the Finals 6 years in a row. Not 1…Not 2….Not 3 but 6 years in a row. The only people who could say the same thing is members of the Boston Celtics when Bill Russell was playing and James Jones. Talk about an outlier…James Jones in the same breath as living legends is what makes the game worth playing. LeBron’s shoulders aren’t broad for nothing as he carries the burden of all the championship missed by his hometown. Let’s be real if LeBron goes 2-5 in the NBA Finals he could be considered the Peyton Manning of the NBA. In other words he wins during the regular season but when it counts the most he doesn’t win the big game. In LeBron’s defense he did lose 2 of his best players and in essence went against Golden State all by himself but he did average 34.2 points, 13.3 rebounds and 9 assists per game. The loss wasn’t his fault but when you are considered the king of basketball criticism is a part of the territory.

Who will guard LeBron James? Whoever guards LeBron will be pivotal because LBJ is such a facilitator that he can get any teammate rolling which can create a domino effect which could propel them to the chip. Last year Andre Iguodala, the finals MVP had the task of defending him. Do you repeat the same strategy this year or do you let Harrison Barnes defend James? If you go with the first strategy do you put Harrison Barnes on the bench or do you go with a smaller lineup?

We all know about LeBron, Kyrie and Kevin for the Cavs as well as Draymond and the Splash Brothers for the Warriors but what about the other guys. Both teams have other guys that can serve as key pieces to the championship puzzle. Cleveland has JR Smith, Iman Shumpert and newcomer Channing Frye who can provide a spark to their second unit or in JR Smith’s case give Cleveland an edge especially if everyone else is playing their A game. JR Smith can shoot you out of a series but he can keep you in one as well. Out of all the role players Cleveland can turn to Channing Frye may be the most valuable role player. I say this because he can play the 5 if necessary and if they decide to go big he can play the 4 and since his game is based on the perimeter he can open up the lanes for penetration by Kyrie or anybody else. Let’s not forget the Warriors and their role players such as Shaun Livingston, Harrison Barnes, Andrew Bogut and Andre Iguodala. Igoudala in my opinion is the most important role player for the Warriors because he can stretch the floor and defend the best player on the opposing team. This could take a lot off of the Splash Brothers’ shoulders and create problems for the Cavaliers.

In every great matchup we have the superstar players, the coaches and the role players but one of the most overlooked factors in the game of basketball is the X-Factor. In this case the X-Factor for this matchup will be Kevin Love vs. Draymond Green. Both of them are great players who can go inside and outside, grab rebounds and create opportunities for other players. Historically, Kevin Love hasn’t had much success against Draymond but the stage is higher and so is the pressure. How will Kevin Love handle the pressure? To be honest Draymond in the last series wasn’t at his best hopefully for the Cavs that transfers to this series but for our sake let’s make sure all parties are healthy and accounted for as we prepare to watch championship basketball. Kevin Love on paper looks like he will have a bad time against Draymond especially on the defensive end and if Draymond gets going offensively Kevin Love could be Bar-b-q chicken-shaquille o’neal voice but as Chris Berman would say, “This is why we play the game” We don’t let the past predict the future for the future hasn’t been determined yet.

Coaching will be at the forefront of this matchup as we have two young coaches with championship pedigrees as role players for their perspective teams now must lead these men into the field of battle one more time as they contend for the NBA Championship. Can Steve Kerr win a chip two years in a row? Can Tyronn Lue prove that the firing of David Blatt was worth it because he will be hoisting the trophy? If Tyronn Lue wins can he step over Steve Kerr like Iverson did him many years ago? Who will make adjustments quicker? Who will be the better sidekick? Who will be MVP? Who will win it all?

This is can’t miss TV so ladies please let us have these next few weeks to kick back and watch this series in peace. Trust and believe you will be awarded for your kindness. My prediction is Cleveland will win in 6 games and set the sports world on fire.