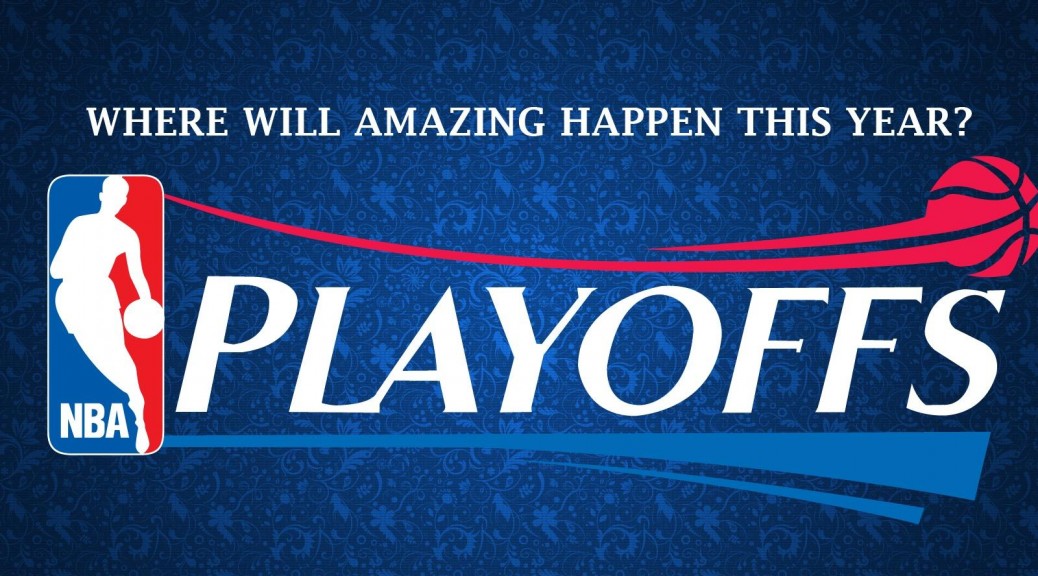 0.9 seconds left Game Damian Lillard off balance three…Game. Watching Roy Hibbert play like me on the court…Set. 5 almost 6 Game 7’s in the first round… Match. I know when you hear must-see television it normally comes from HBO, TNT, VH1 or possibly BET but lately must see television starts with these letters: NBA. There is no drama on TV right now as compelling as the first round playoffs. This is like the thrill of a March Madness game multiplied by 50. Is there a way that Round 2 could be better?

The matchups have been set, predictions have been made and even though these matchups are intriguing can they match the same intensity that had us glued to our seats for the past 2 weeks or was it an anomaly? I’m not a writer but if I was call the Golden Globe people not now but right now.

Think of your favorite show right now, for example Game of Thrones, 24, Boardwalk Empire, The Walking Dead and others and imagine watching 50 episodes consecutively where the impact increases with every episode. How many people would need an oxygen mask? How many timelines would you flood with your every expression? How many phone calls and text messages will you miss? How many times would you call Stoko’s for delivery?

Are you not entertained in my best gladiator voice is the only words I can use to describe my excitement for this NBA Playoffs. The playoffs were so good in the first round that I was a fight party for Mayweather vs. Maidana and he kept changing the channel back to TNT. Now I’m not poor or rich but if I spent 74.95 for HD programming, I’m watching every minute. As a matter of fact I would become a commentator; I might even watch it again like a re-run of Sportscenter but that just shows how entertaining the first round really was.

Even the best writers of all-time couldn’t fathom the outcome of the first round of the NBA Playoffs. If this was scripted who was the idiot that threw that Donald Sterling curveball into the mix. Whoever that person needs a vintage Iron Mike two piece combo to the forehead so you can look like Martin when he fought Tommy Hearns.

There were 50 first round games. 5 Game 7’s maybe 6 if James Harden played as much as defense as college kids play Madden or 2K but hey he’s a millionaire so who’s the real winner there. There were 3 upsets which brings the comparison of a March Madness tournament but there weren’t any real blowouts beside the 40 point drubbing LA handed to Golden State. There were 8 overtime games need I say more. This may be the best first round of NBA playoffs in history. Can the next round continue to trend or will it die out quicker than a Twitter hashtag.

Can the second round live up to see the agony of Indiana as it’s late season collapse continues into the playoffs even though they made it to round 2 but they were taken to a 7 game series by a team that only had 37 wins. If you’re not good at math, the NBA season is 82 games long so minus 37 wins guess what you have 45 losses. This is the one time that mediocrity could have been as rewarding as summa cum laude. Can the second round live up the experiment known as Roy Hibbert and the disappearing act that only David Copperfield can explain. I wouldn’t be surprised if Michael Jordan told LeBron after the Heat swept the Bobcats, ‘I had the monstars take all of Roy Hibbert’s skills, thank me later’. Spurs and Mavericks had Vince Carter playing like his days at Toronto hitting buzzer beaters and Kevin Durant was called Mr. Unreliable. If that isn’t an oxymoron, I don’t know what is. Kevin Durant in my opinion best scorer in the league and to make that statement even more stupid he will be named MVP later on this week. Let’s not forget about the Zach Randolph punch that makes the infamous phantom punch of Ali era seems like a haymaker. That wasn’t a punch maybe a mush at best but like I said I don’t write this stuff.

What was lost from this first round was the coming of age backcourt of Wall and Beal that is bringing fun back in DC. But they will have their chance against the Pacers so let the games begin. From the buzzer-beaters, punches, Blake Griffin acrobatics to the block in Toronto that made all fans go back to hockey there is still a chance of a Miami 3Peat.

Even though the top seeds made it to the next round they were taken to 7 games, will this have a toll on them in the next round? Will Roy Hibbert be dominant or nah? Will Wall and Beal be household names after this? Will Paul George continue his rise to stardom? Is Damian Lillard a Top 5 PG after this playoff? Will Jay-Z dap up LeBron in Brooklyn? Will it be more game 7’s this round? If OKC lose will the blame be placed on Westbrook?

I’m going to make my predictions as I see in an upset Wizards in 6 barring any Nene head butts, Thunder in 7, San Antonio in 6, Heat in 6 but make no mistake these series will still have excitement, intensity and borderline insanity but that’s what the playoffs are all about. This is the one time I don’t mind hearing Jim Mora yelling out ‘Playoffs’. Watch out Miami because if Brooklyn steals a game someone crying in the car. If the Wizards steal a game, Roy Hibbert would have scored 0 points and 0 rebounds again and be the butt of every joke known to man. If Portland steals a game, Gregg Popovich’s interviews will get worse. If the Clippers steal a game, then the question of who’s the real leader of OKC dominates at least the first 30 minutes of ESPN First Take and who doesn’t what to hear Stephen A Smith articulate his viewpoints while so eloquently dismissing Skip Bayless as he’s pontificate his views until the point where he becomes unpleasant to be around….see what I did there (for those that watch ESPN First Take, you know Stephen A Smith uses those words at least twice an episode. He’s the Cornel West of Sports Talk; I need a dictionary, thesaurus, SIRI, google and a stenographer every episode. I salute you Stephen A Smith and your usage of vocabulary) We have already seen 50 games how will the rest turn out…no one knows but to quote Jack Buck…..’I don’t believe what I just saw’